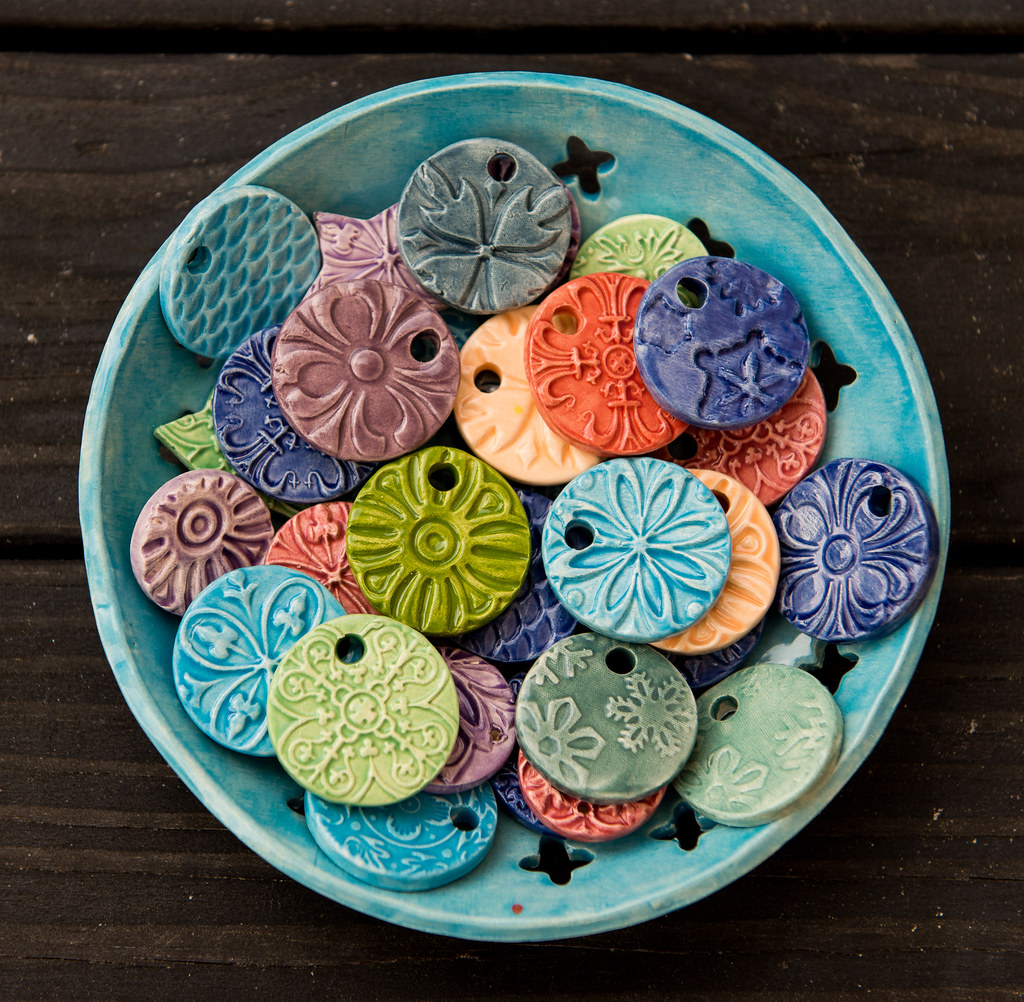 I’m just going to plow on in, ignoring the year and a half absence and domain change, okay? I have another new hobby- of course I do! It’s not really new-new, I’ve worked with ceramics and pottery quite a bit (I really wanted to major in art for a moment). But, it’s been at least a decade. Then, I found a nice little kiln on Craigslist, and *poof*- we have even less room in the garage for things like cars. 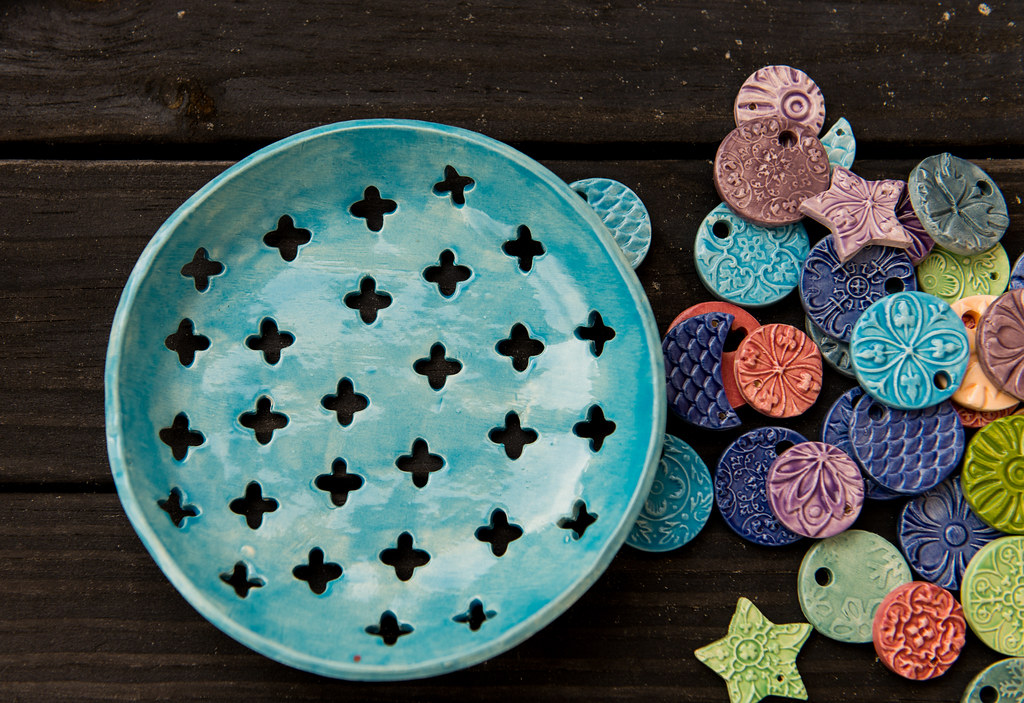 This is part of my latest batch, just pulled from the kiln midweek. A turquoise bowl with little “violets” punched out, and a bunch of pendants (nice for practice/glaze trials). 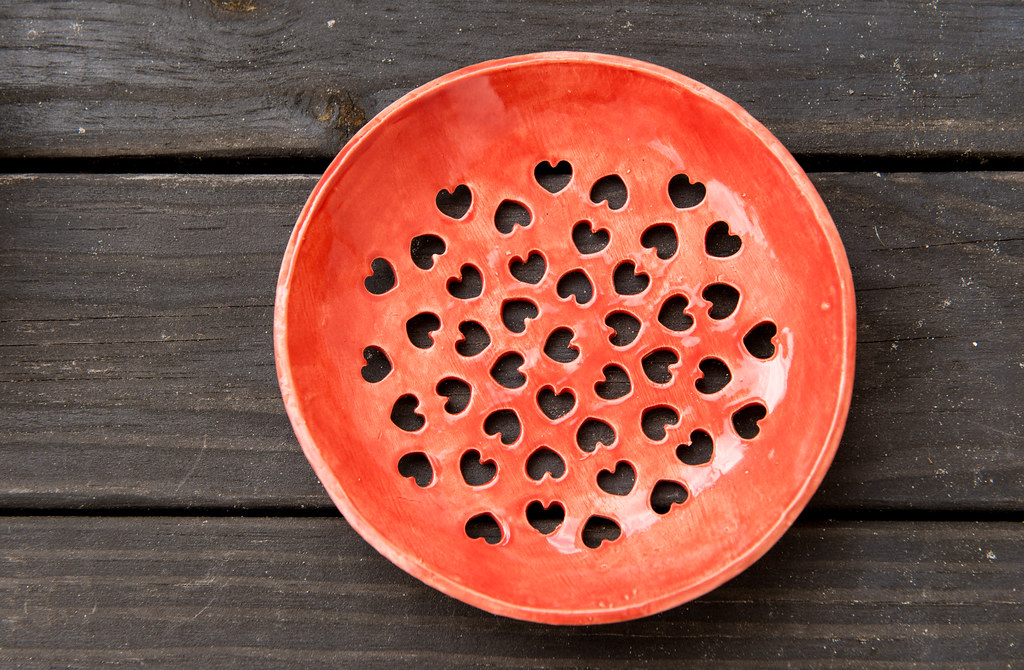 Here’s its friend, with little hearts punched through. I suppose these would be useful to wash berries, but, I’ll probably use them to organize odds and ends (that aren’t small enough to fall through the holes). 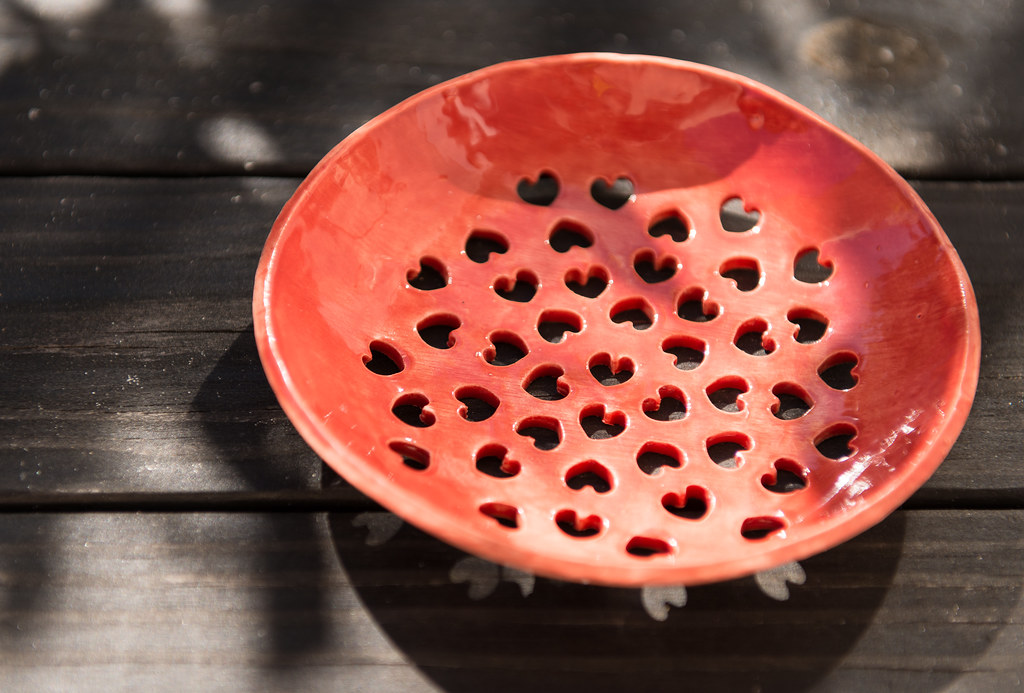 I’ll have to use the heart cutter to make a candle holder- it’s cute when light peeks through the holes. 🙂 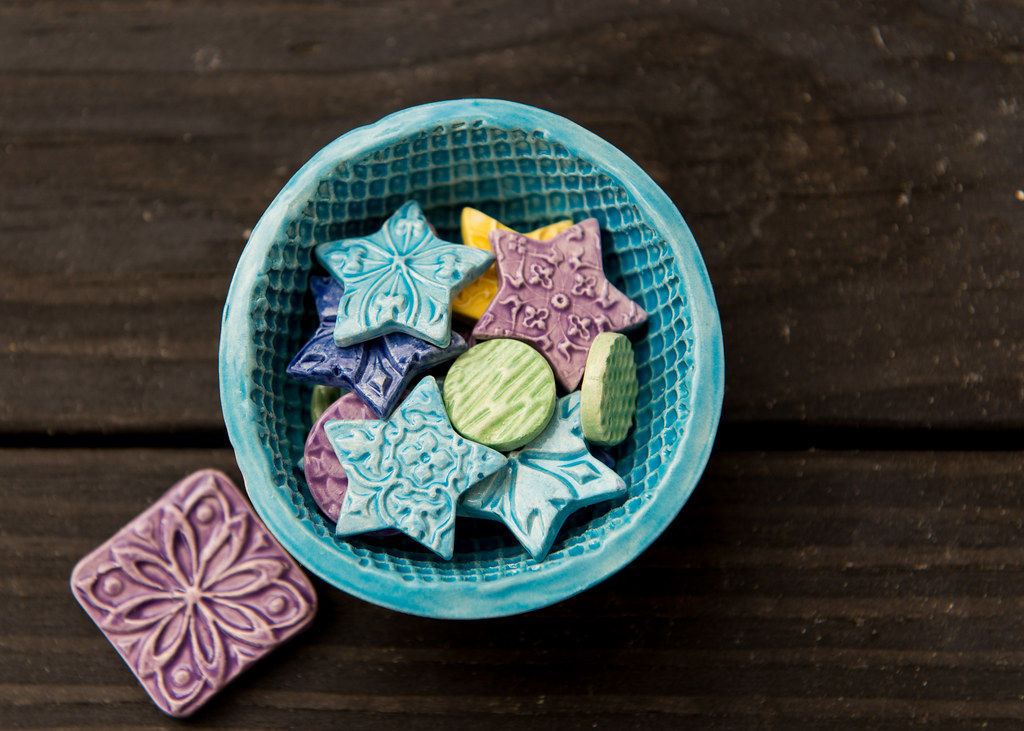 A tiny little bowl full of magnets (or soon to be magnets- I need to find some). I have a great rubber texture mat that I got years ago, with the little tile patterns- I don’t remember why I picked it up, but, it sure is useful for this! 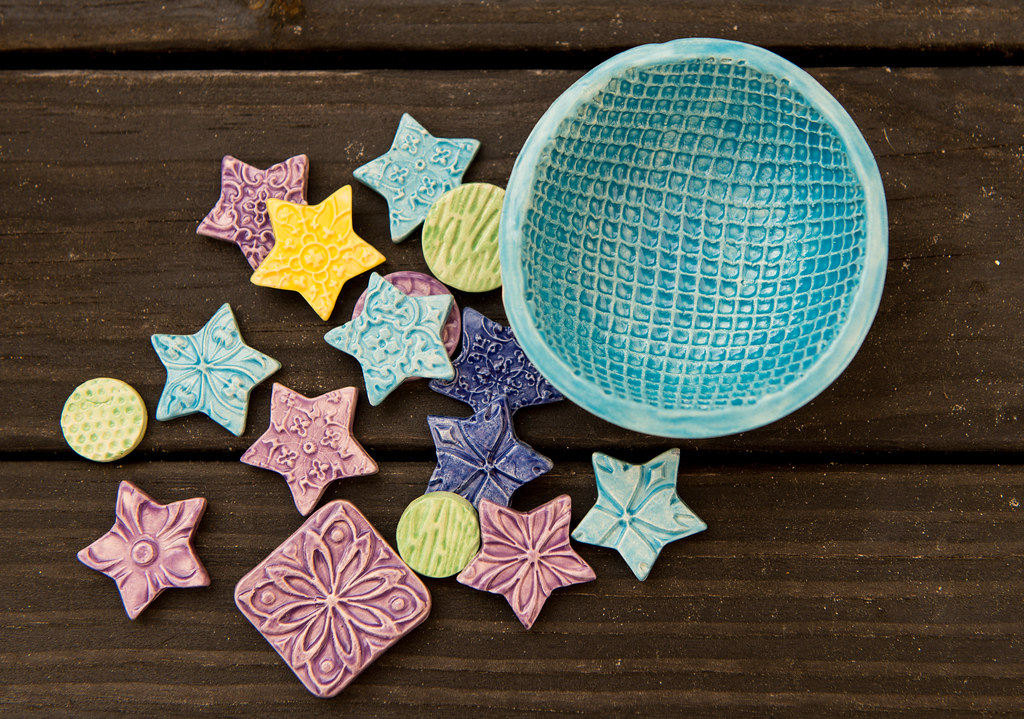 I love the way the waffle texture worked on this bowl. With its bright interior,small size and bare clay exterior, it reminds me of a geode. I still have bunches of magnets and pendants to glaze, they’re great to squeeze in between bigger things to get the most out of a firing! 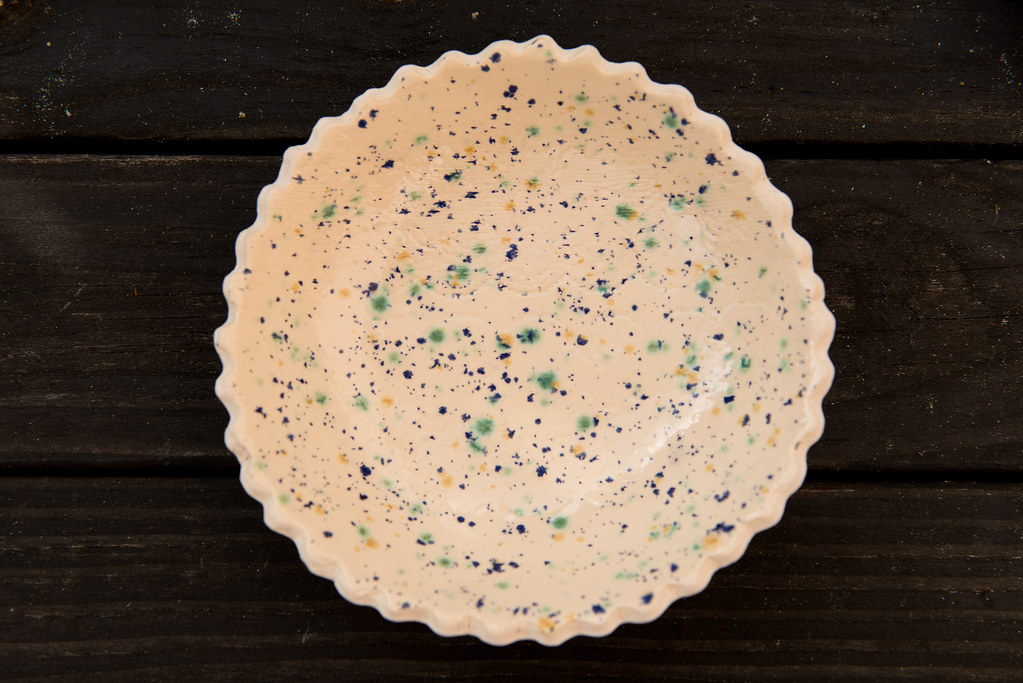 This was a brand new (to me) glaze, and I went a little nuts with it. I’m glad I like it! The little speckles of color are fun! 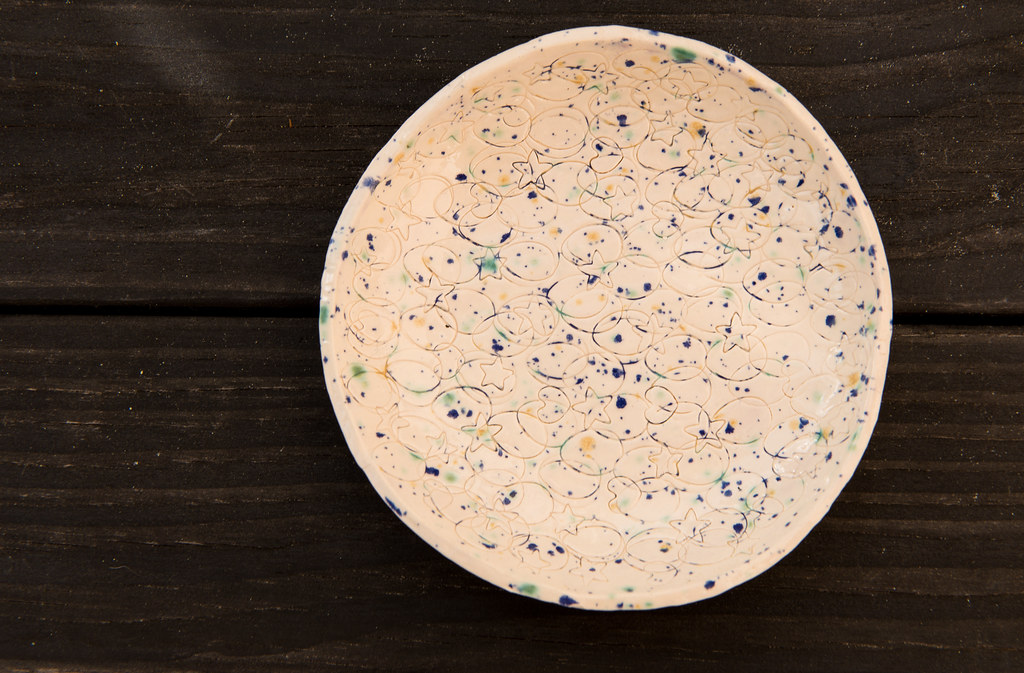 Tiny cookie cutters textured the slab before I cut out and formed this bowl. 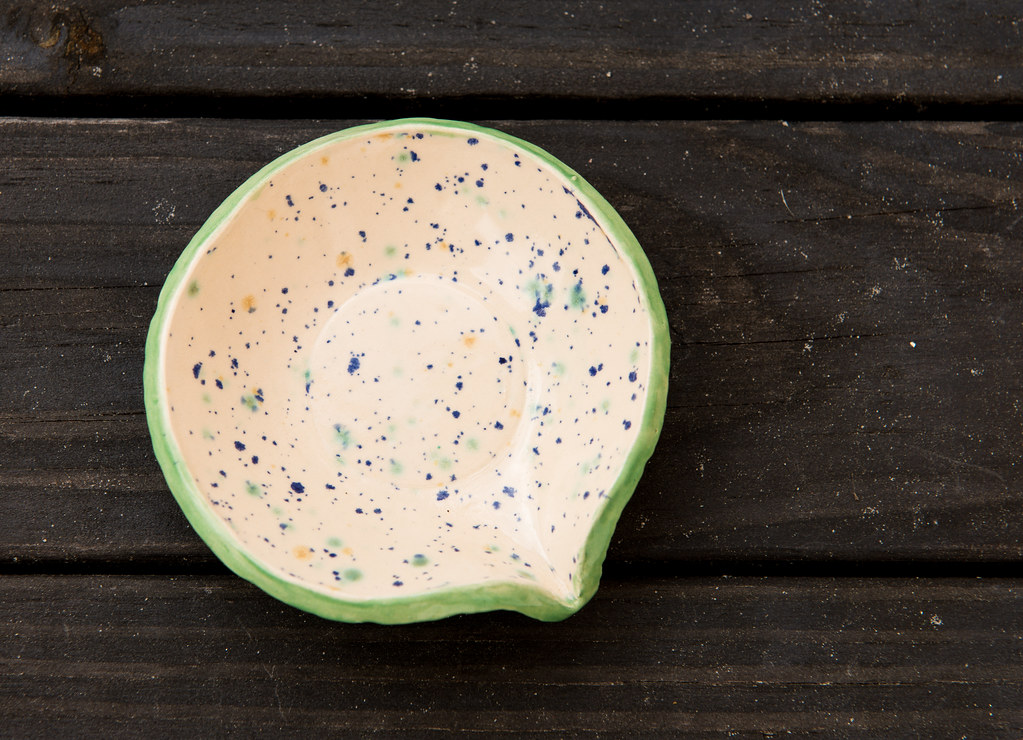 This is a small bowl with a spout- I think it will be good for glittering things, I can just pour the excess glitter back into its jar. 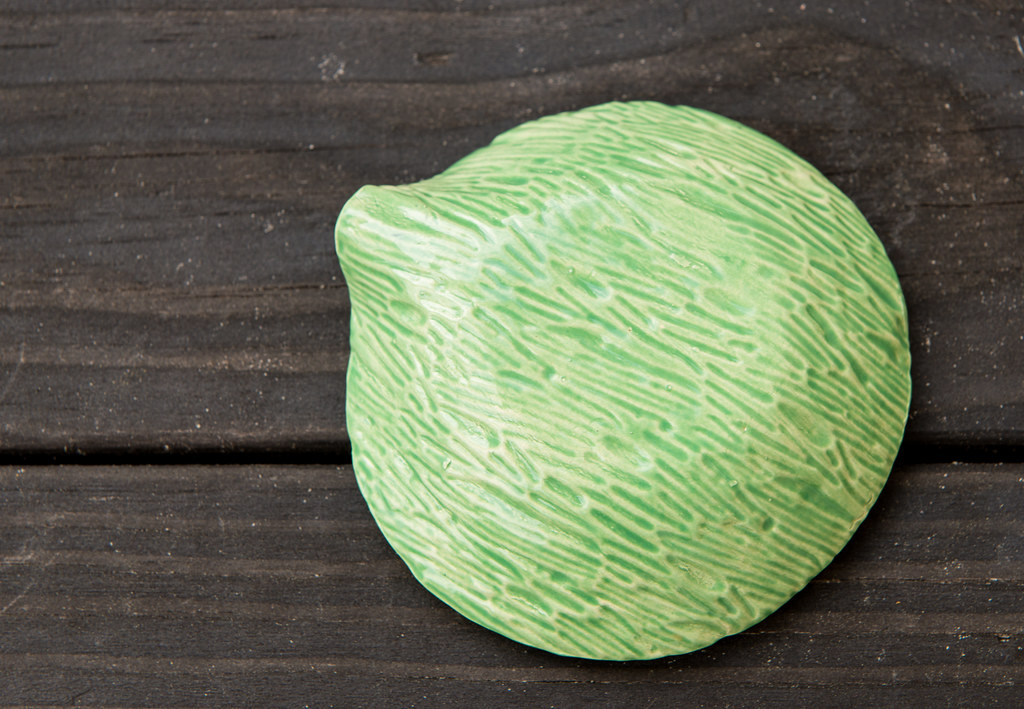 And I love its belly! Sort of a wood grain texture, from a texture mat made for oven bake clays. 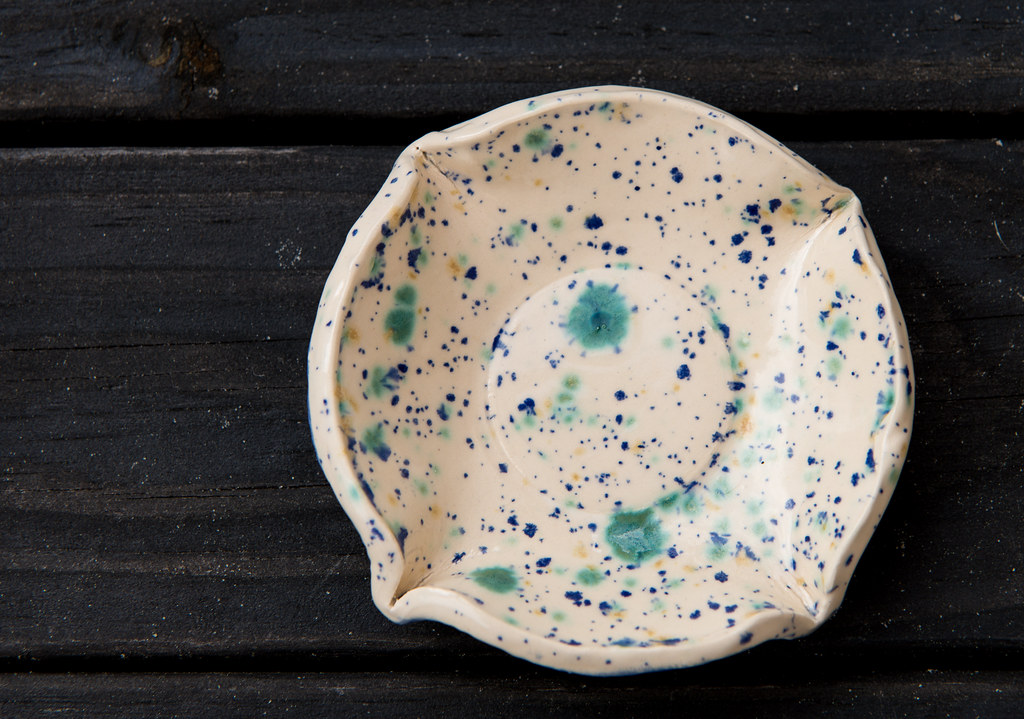 Whoops. Well, it looks like an ashtray, huh? Not a cute little bowl to rest detail paintbrushes on while I change colors? Oh well, I think it will work for my original purpose just fine, I’ll just have to remember not to use this glaze with that shape again! Ha! 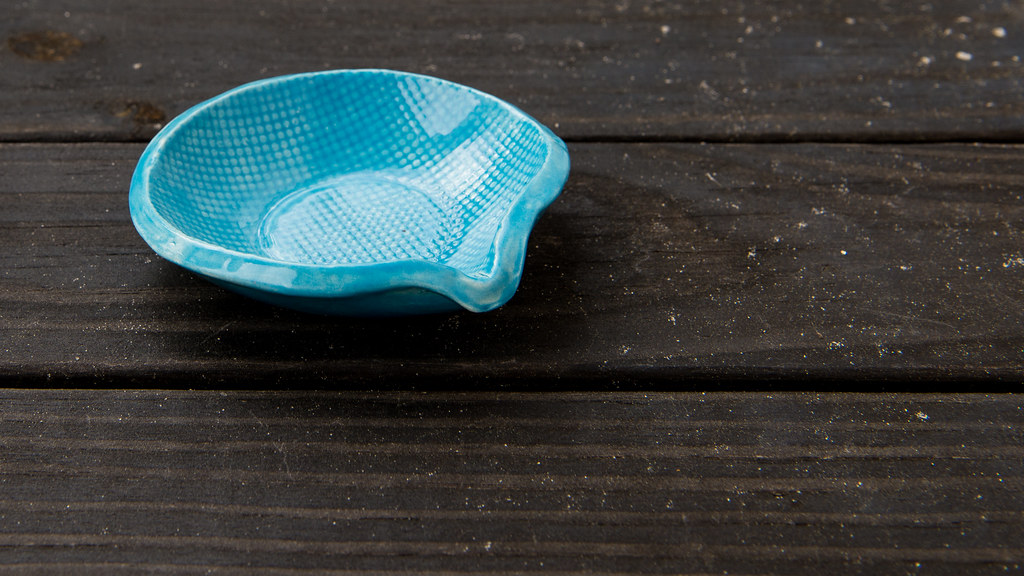 Another glitter/pouring bowl. I love this glaze, I think I’ve used it the most. 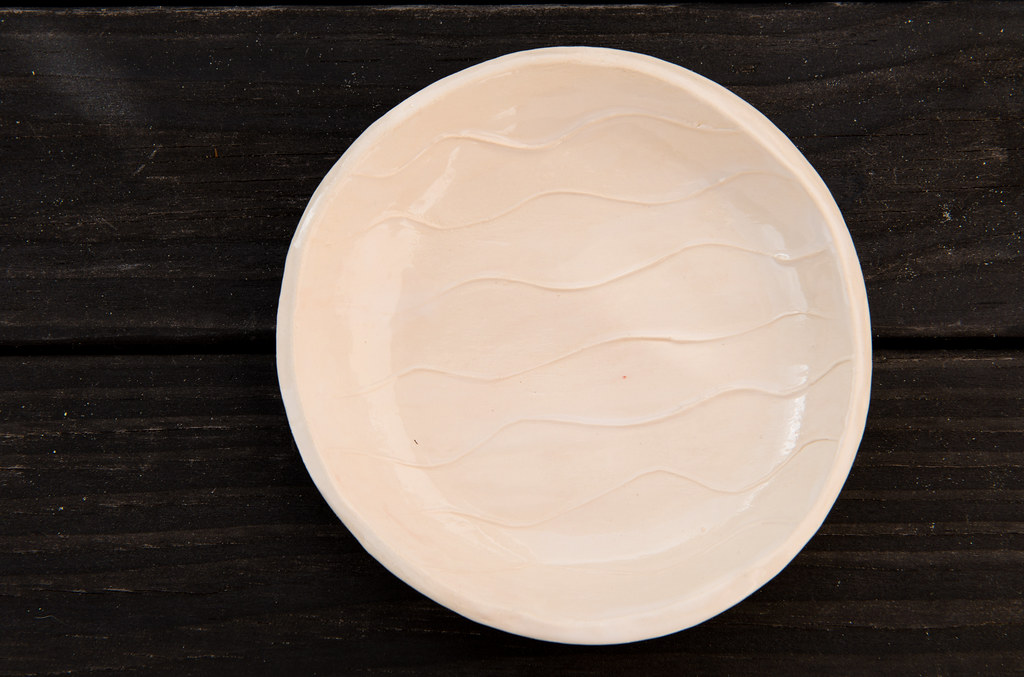 Another bowl, this one with a thick white glaze that was a pain in the tush to apply (I’ll try to thin it next time), but, it sure does fire nicely, very opaque and glossy. I used a rubber toilet gasket to texture this one, heheh- I carved the waves into it with a lino carver. Cheaper than blocks of actual carving material, flexible, and easy to store. 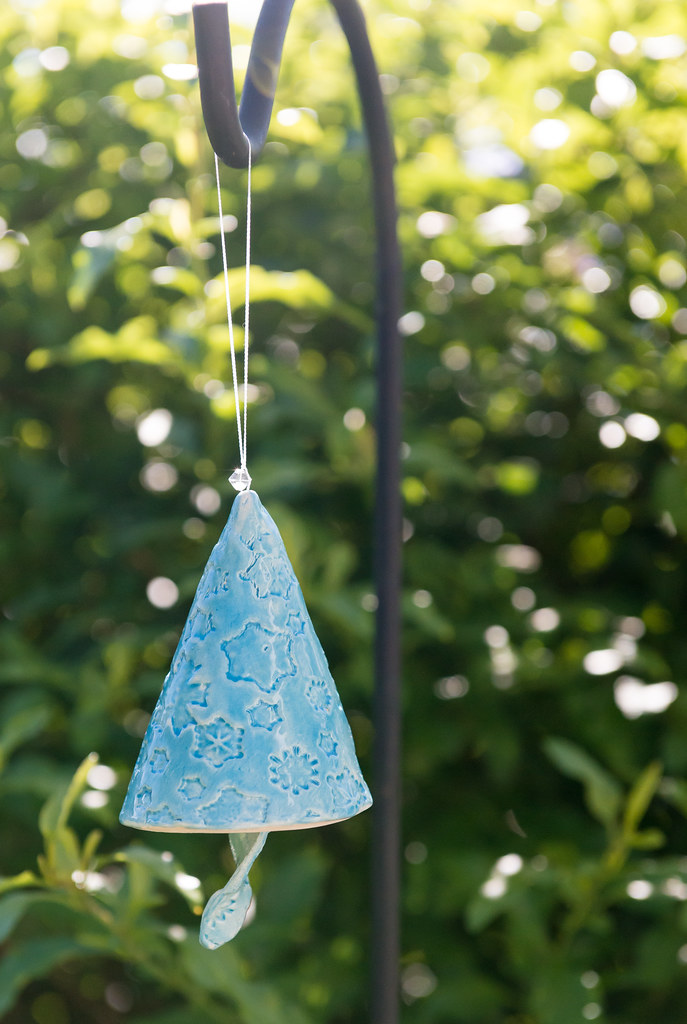 I used it to glaze my daughter’s wind-chime/garden bell. 5yos and anything Elsa-y, she always reaches for the snowflake texture sheets. This was an easy project to do with my kids- they helped roll the clay out, roll the texture on, and scratched/wet the edges of the semi-circles so I could form them into cones.  They poked a hole in the top and flattened a fat little clay worm with the texture sheet for the clapper. 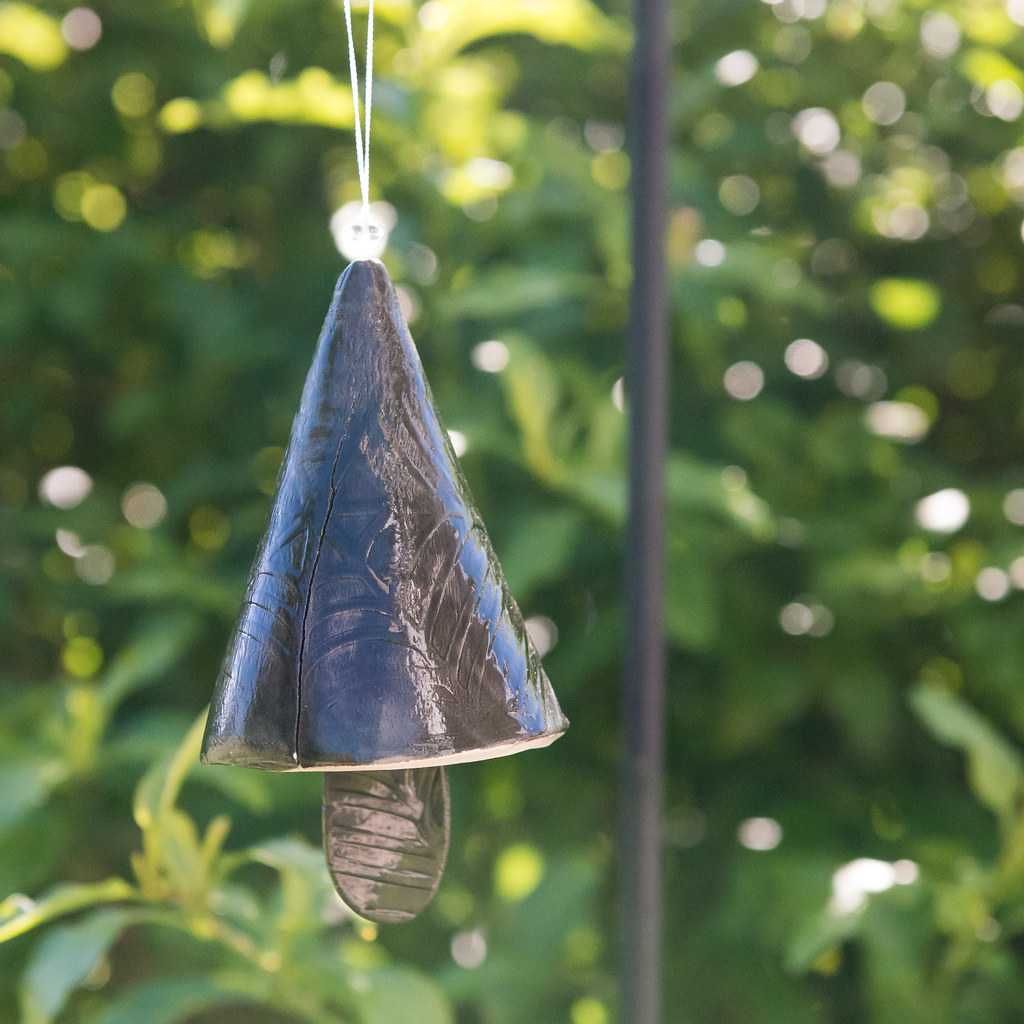 My son chose a spiderweb texture for his, and shiny black glaze! His cracked as it dried, but, we decided it looked cool, so we didn’t repair it (and it doesn’t seem to affect its function at all). Fun little projects. I might have to make more  myself! 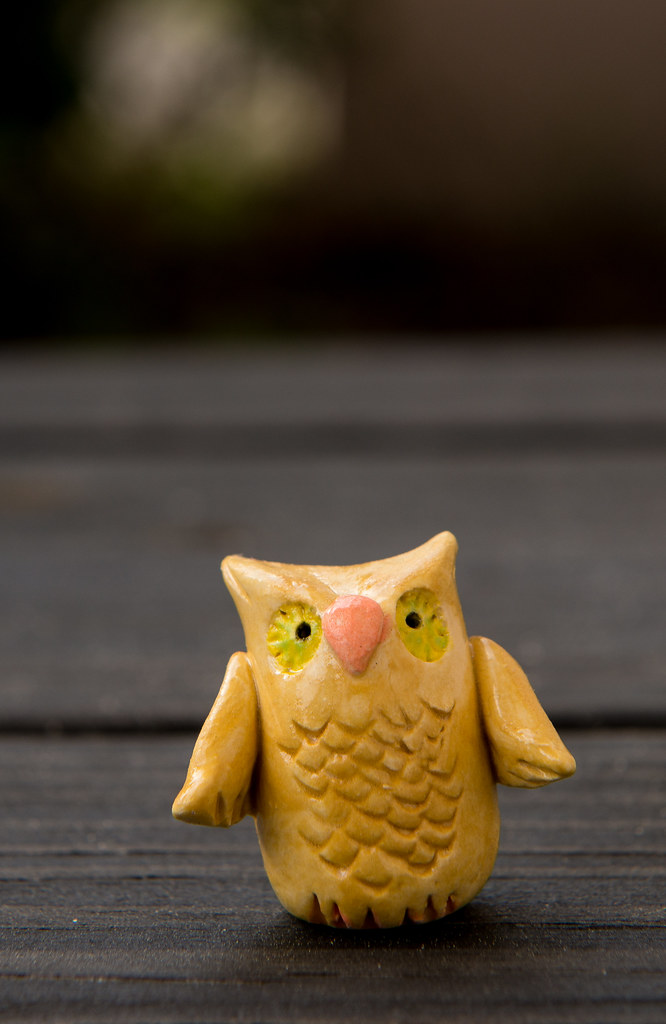 And I’ll end it with this little guy. He’s what happens when I find just a little bit of clay after I’ve closed up the clay bag and put it away. Laziness owl. 🙂